If you play football, you are a football player.

If you watch football you are a football supporter or fan. 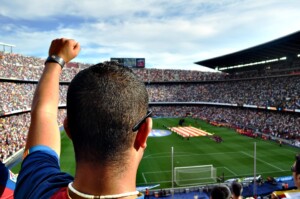 A football fan in the stadium

Who do you play for? I play for Cambridge United.

What team do you support? (Which team is your favourite?) I support Cambridge United.

You play football on a football pitch. This is the grass you play on.

A stadium is the pitch and the seats.

The clothes you wear are your football kit.

A home game is when you play in your team’s stadium.

An away game is when you play at the other team’s stadium.

The referee is the person who ensures that the players follow the rules of the game. The referee can give a free kick, a penalty, a yellow card or a red card.

When a player kicks the ball into the net, they score a goal. 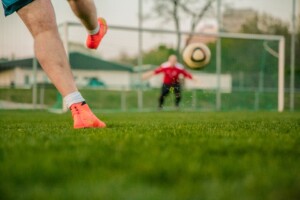 A football player takes a shot.

To pass is when you kick the ball to a player from your team.

A header is when you move the ball with your head.

If you tackle a player from the other team, you try to get the ball from them.

The goalkeeper – stands in the goal and tries to stop the other team from scoring.

The captain – the player who leads the team, he or she is often the player with the most experience.

A substitute – plays for part of the game.

Keep up to date with our newsletter

We use cookies to ensure that we give you the best experience on our website. If you continue to use this site we will assume that you are happy with it.Ok